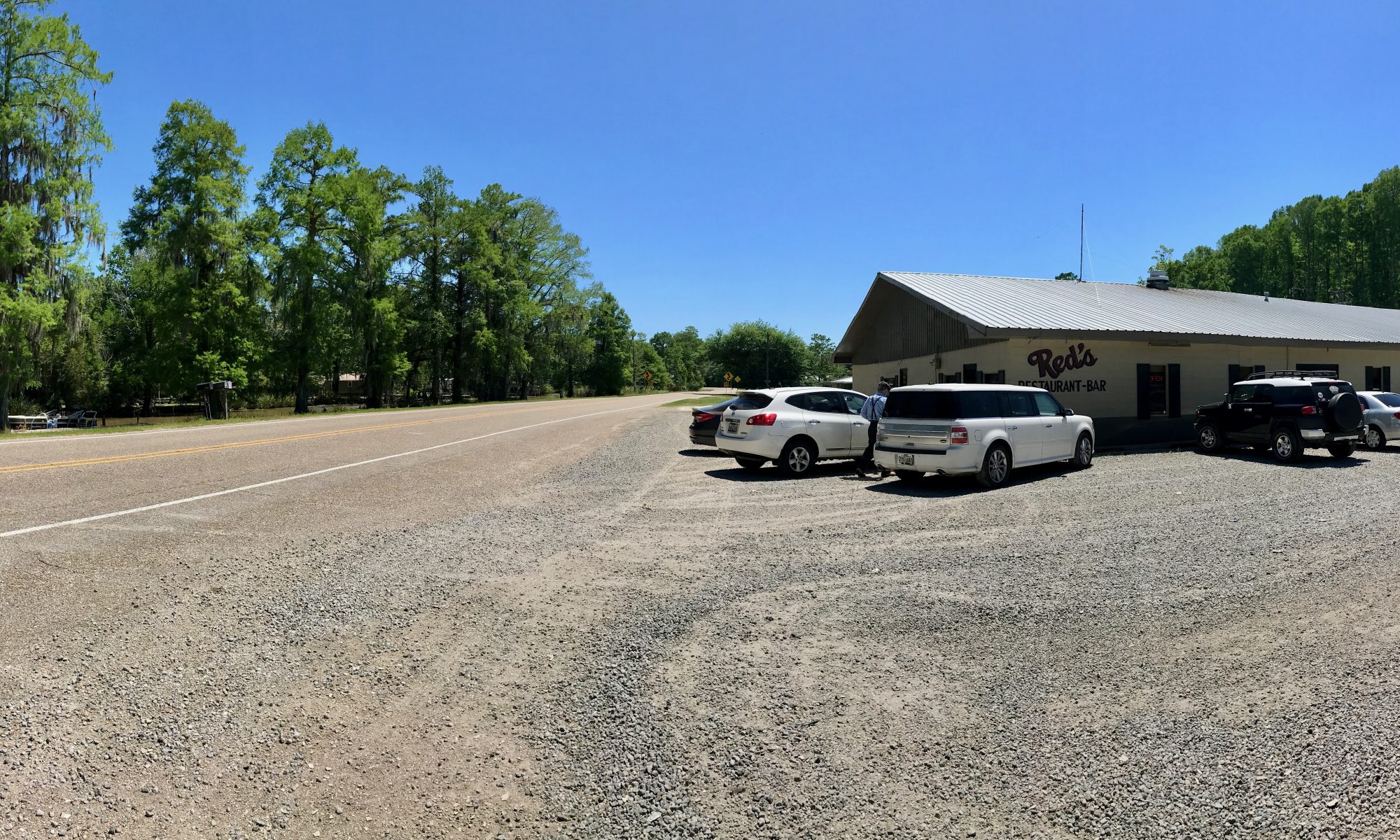 This morning I was tasked with helping out with entertainment center related tasks for my parents at their house. I worked all morning and built up quite the appetite for lunch, so after I finished my parents and I made plans to go have lunch.

As we were deciding where to go, my momma wanted to come up with a place that I have never been. So she starts naming places and threw out Red’s. I’ve seen this place a few times passing by, but never went in. So I said yeah, thats good, lets go to to this place that I’ve never been before. I’m always up for trying out new places.

So we hopped in the car and headed all the way from Prairieville to Maurepas. It was a clear day with temperatures in the upper 70s. The path we took was LA 42 over to LA 16, then on to LA 22 that follows the path of the Amite River into Maurepas. Overall, it was a great day for a little trip out into the swamp to get some lunch.

Red’s building is surrounded by a large gravel parking lot. Across Hwy 22 there is space along the banks of the Amite for people to park their boats and cross the road to go to Red’s. Inside, Red’s features a huge dining room and a nice sized bar. As this was just a lunch, I did not have a chance to partake in the bar atmosphere. Maybe next time.

We started out the meal with fried onion rings and stuffed jalapeños. The onion rings were freshly cut, battered and fried. They were delicious. The stuffed jalapeños seemed to be less stuffed and more boudin ball like. It’s like they took some jalapeños, chopped them up and mixed it with a stuffing mix, and deep fried them. It was a delicious and interesting take on that dish as I was expecting your usual creme cheese stuffed jalapeños.

For the main course, I chose the ribeye and grilled shrimp. The meal comes with an 8oz ribeye which I choose to get it cooked medium-rare. The shrimp where blackened and my choice of potato was cajun fries. I could tell the steak and shrimp were prepared in a skillet rather than grilled, but that did not detract from the overall tastiness of the dish. I enjoyed it. I’m pretty basic, if the meat it tender and cooked to the correct temperature, I usually enjoy it. Shrimp were seasoned properly and also delicious. The cajun fries were ok, similar to what you would find at Popeyes. The only thing missing from the images was my side salad, which was shredded lettuce, diced tomatoes, croutons with ranch dressing. The salad was basic but good.

Overall, this place was a gem out in the swamps of lower Livingston parish. I definitely want to return to enjoy some time at the bar and try some more of the menu items. As we walked out, we noticed that the cooks in the kitchen were some nice older ladies that appeared to have many many years of cooking experience under their belts. I could taste the love in the food as if my grandmother made it.

After leaving Red’s, we wanted to see how to get across to the camps on the other side of the Amite River. About a mile up the road from Red’s, there is a small bridge that crosses the Amite. Here is a picture from atop that bridge. Many people were out in their boats going up and down the river.

While we were heading to Red’s I noticed another one of those Maurepas WMA brown signs pointing to a parking area. On the way back, we stopped by the parking area. This parking area’s scenery was more wooded, less swamp than the one we came across yesterday. It seems as if this parking area was a launch pad for hiking through the forest.